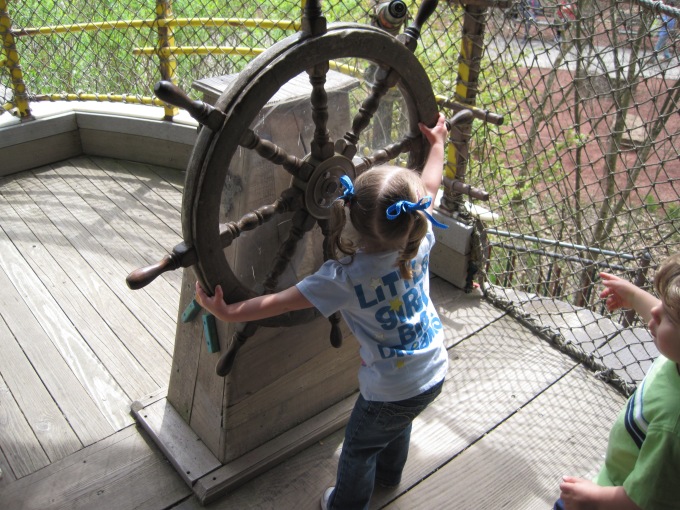 My oldest daughter, Brianne, is about to turn 3.  For her birthday, she would like swim goggles and a pair of running shoes.  God Bless her.

This is the third year we’ve taken swim lessons, and Brianne is still afraid to go under the water.  Even in the bathtub, she get’s mad when water get’s in…or scarcely near, her eyes.

I get it.  Water in your eyes is uncomfortable.  Closing your eyes underwater detracts a sense we’re used to.  Brianne is more afraid of the darkness than the water in her eyes.  She wants to go under water…she just wants to be able to see while doing so.  Maybe she wants swim goggles because she knows she’d love to swim if she could just see under the water.  Who am I do discourage her?  Amazing, that at 3, she has found the solution to her own problem and asked for ‘swimmy goggles.’ (the purple ones.)

Don’t we all feel that way, sometimes?   I wish I could have swim goggles to see more than just under water, though.  It’d be nice if they could decode conversations…and intentions.  Those would be some handy goggles. I’ve lost countless hours pondering how to avoid being misunderstood.

The other spectrum…why does my 3 year old want ‘running shoes’ for her birthday?  In her words:  “Because I’m faster than the other runners.”  (The ‘other runners’ she refers to is the high school distance runners that I volunteer to help coach.)  It sat as nothing but a cute sentiment until she literally started to leave on their run with them this past week.  I had to chase her down, her 8 month old sister on my hip, to get her to stay at the track while they went out for a run.

It was then I realized how serious she was…and who am I to tell her it’s a pipe dream?  Maybe she has already discovered a passion for running.  After all, she did pretty much skip walking and went right to running as a baby.  Two steps on the track and her little feet just start striding along like they were built to do so, and before I know it she’s yelling at me from the goal posts at the other end of the field.

It might be a stage she grows out of, but then again it might not be.  Proud of myself for taking the time to listen to my toddler, I found myself wishing adults would listen openly.  Ahhh, the things I learn from my kids.

Brianne knows she’s afraid of going under the water… so she asked for goggles, which will eliminate that fear so that she CAN go under water.  What a brave little 3 year old to find a solution to the problem instead of running from it.  And for her to recognize that she loves to do something so much that she wants new shoes to be able to showcase that talent just floors me.  In asking for swim goggles and running shoes, has she addressed her talents and shortcomings, or just begun the quest of self confidence?

After all, I may be over-analyzing…I mean, I am a mom…and overprotecting and justifying why my kids are the greatest is just what I do…but what if she really becomes a great runner down the road?  Better yet, what if she appreciates that I listened and encouraged her…even if I don’t REALLY think she can out-pace girls 15 years older than her…and that instills in her confidence to accomplish her dreams.  Whatever they may be.  Thanks to Hannah Montana, she’s big into dancing right now, too…so she could go in a lot of different directions.  We’ve got time. 🙂

Wouldn’t it be great if that kind of empathy could exist adult to adult?  If we gave each other room to make mistakes and genuinely listened…just listened…without our own agendas running through our minds at the same time.  Watching Brianne make up little dance moves in her room when no one is watching, and practice starts out of her make believe blocks, reminds me to submerge the urge to control what she’s interested in.  Over encouraging in a certain direction?…nah.

Some people are just naturally pesimistic.  I’m not one of those, mainly because of my faith.  I hate to think of how many Brianne’s there are out there dreaming up the same big dreams she is, and if they are being encouraged to do what they love and embraced for who they are…or being bullied for it along the way as they grow into adults?  I mean, if adults aren’t empathetic, accepting, and encouraging of each other…why would kids grow up to be?  They learn from us.