Of course I thought my oldest daughter would make it up until midnight to ring in the  new year.  Without a doubt.  Her eyes weren’t going to close until that big huge sparkly ball dropped.  I explained New Years Eve to her earlier in the day…followed by a New Years Snoopy cartoon, and the promise of Lady Gaga and Bieber…so she was amped about the party.  The late afternoon nap I tried to diligently to stage after the well thought out baths after lunchtime was foiled by daughter number 2…who woke up from her nap early and started pounding on big sister’s door calling for her to come out and play.  Hmmm…very small nap + very late night = toddler meltdown.  I mean, that’s usually the equation, right?

Amazingly, both kids ate all their dinner without me having to beg…odd…maybe we’re looking at a more pleasant dinnertime experience in 2012?   Ha.  I do like to kid myself…just for kicks. I totally bribed them with soft pretzel and pizza roll snacks ‘for later.’   Then, they played dress up together nicely for, like, an hour…ok… what’s to come?  Where’s the meltdown?  Daddy comes home on time, and gets welcomed by a tornado full of glitter that constantly streams down off their dress up clothes, and a photo montage of the night’s outfits.  Rock Star Bri and Princess Lo continued to run around laughing and screaming…Lo with two chunks of pretzel in here hand and a ‘dink’ sippy under her arm at all times.  I have to say…best New Year’s Eve Party ever. 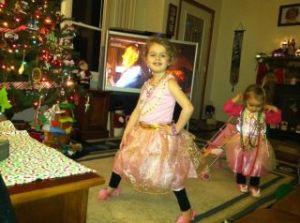 Finally the ball dropped, and we all screamed the countdown.  I successfully prepared her for the excitement of the evening…but forgot about what happens after.  Bedtime.  She looked at us like were were crazy people.  How dare we shuffle around to “New York, New York” one minute and the next tuck her in?  Were we crazy?  Probably.  As sad as she was to call it a night, she didn’t have much energy left to fight about it.  Too many rounds of Candy Land.

I have to say, counting down to the New Year (ok…more like screaming…) with my husband and oldest daughter was enough to make me tear up a little.  Cliche to say, “it’s the little things,” for a reason, I guess.  With the last of the hurricane of post pregnancy hormones finally dissipated…it’s nice to just relax and revel in our family of four.  It’s been a surreal transition for me to shift my priorities slightly from my family to …MY family.  My little family of 4.  All the things my siblings and parents and I all went through together…I’m now starting to experience with my little Bucher clan.  It’s so cool.  And I’m in charge…bah ha ha ha ha ha!!!!  (Oh, who am I kidding, I’ve always been in charge.  LOL.)

I am more than ready to say goodbye to 2011.  Although, any year I get to welcome a new member of the family is a good year, right?  Welcome to the clan, bro-in-law, Drew!  A year full of unusual challenges and more than enough drama…I bid it farewell in hopes of slightly calmer waters to navigate through 2012.  Pretty good at keeping resolutions in years of late, I’ve been considering quite a few for this year.  I settled in with, “Write. Every. Day.”  (No worries…it’s not “post a new blog entry every day…lol.  I can’t even take that much of myself.)

Explaining the concept of a resolution to Bri seemed to go over her head…she seemed not to be listening…just wanted to talk about how I am to photograph her ‘Rock Star’ face.  Then again, never underestimate a 3-year-old.  They DO always hear you and WILL undoubtedly repeat the it …especially if it can somehow be construed and mixed up to be inappropriate…in the worst place at the worst time.  Which are some of the funniest moments…EVER.  Yep.  Never underestimate a 3-year-old.  They’ll change your life.