January.   Usually the dead of winter is time to go sledding, build snowmen, attack each other with snowballs in snow forts, dress in 16 layers of bulky winter gear to play outside…

This January, the snow boots that I so diligently door-busted at the end of last winter have often been shelved for rain boots.  The type of boot doesn’t matter to my kids.  Just the fact that they need them improves their overall demeanor.

Each day begins with Lo chanting “OUTSIDE! OUTSIDE!” Standing by the back door, often before the sun comes up, she starts her plea.  Cold and rainy as it may be, you’re never too old to have fun splashing in puddles.  And, as worn out as big sister’s old rain boots are, Lo cherishes all 2 sizes too big of them.  (I literally have to put slipper socks on her feet instead of socks so they have a fighting chance at staying on.) 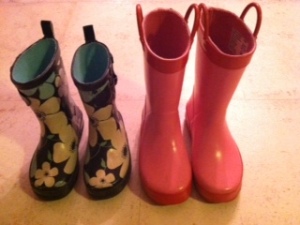 Rain boots and coats on, out we went to take big sister to pre-school…and splash they did all the way up to the door.  Insulted by me for wanting to take her inside right after we dropped off Sister, I finally caved.  Out we stayed…and  down the street Lauren trotted happily.  Chasing a stray cat for a little while, marveling at the eagle flying over head, chatting it up with the ducks once we reached the beach.  The real highlight, though, were the rain boots.

Everyone got to see them.  “Boots!  BOOTS!” she exclaimed proudly to everyone who would pay attention to her.  Sticking her foot out, hands on her waist, admiring them herself…I love the fact that she appreciates a cute pair of footwear.

It’s what I love about kids the most.  They take such immeasurable joy in the littlest things…and often drag me right along for the ride.