One year and a half does not seem like a long enough span of time to witness all of the knowledge my youngest daughter has attained.  Just on the cusp of speaking full sentences (we’re officially up to 3-world phrases) and running full speed everywhere she goes, it’s mind boggling to think this time a year ago she was crawling around on her hands and knees.  Just the normal milestones are amazing, but this kid has comedic timing.

Born with a literal sparkle in her eye, she has the natural ability to make light of any situation.  And her latest milestone has been realizing how to manipulate that ability in order to get out of trouble…and get everything she wants.  I hate to admit it…but it’s working. 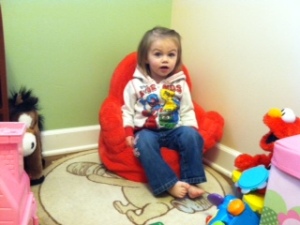 It has always been hard for me to look at my kids with the ‘discipline face.’  They are so stinking cute, that unless it’s a really big deal I let most things go.  However, no parent gets away scot-free without having to ‘rear’ their kids in the right direction.

Those first few times with my oldest daughter, now almost four, were harder on me than her.  After laughing and smiling through the first few stern ‘NO’s’, she finally realized I was upset with her and turned on the waterworks as she reached out her arms for a hug.  I had to walk away to keep her from seeing me tear up.  It’s so hard to discipline kids!  But someone’s got to do it.  And that someone, since I’m with them all 90 percent of the time…is me.

After those first few times I had to get a disciplinary message across, my oldest started to revert her behavior when she caught my tone rising to the next level…that is until she turned 3…but that’s a whole new topic altogether.  So, second kid around I felt more prepared.  It didn’t help, but at least I felt confident going in.

CRASH! I heard Lauren’s dinner plate crash onto the floor, followed closely by the fork and spoon scattering to opposite corner’s of the kitchen.  After being told multiple times not to use food, plates and utensils as practice for throwing things….it was time to lay down the law. I mom-marched hurriedly into the kitchen, spun her seat around to face me, and gave her a stern ‘NO.’

There it was.  The shoulder shrug.  That’s how I know she knows that she is up to something she ‘s not supposed to be.  It’s a dead giveaway, and her preface to an emotional…crocodile tear…heart-melting sob of dismay.  I instantly started to feel the need to walk away…feeling so bad.  Here it comes, I thought.

Feeling myself start to tear up along with her, she suddenly switched gears on me…trading the misty eyes for a smirk, and now appeared to be holding  in a giggle.  I prepared for round 2.

‘NO!’   The smirk grew.  Now, the giggle could barely be contained, and big sister was getting in on the action from across the table.

“NO! NO! NO!‘ I took my volume up another notch, and she stared me down with those sparkly blue eyes…her gaze like a hole into my soul…abnormally long little eyelashes blinking a mile a minute…shoulder’s shrugging…bottom lip quivering- INTO A SMILE!!! I couldn’t believe it.  This, I though, was going to take everything I had to keep from cracking a smile.

“N-” ….I started in again.  But I was too late.  Brianne couldn’t hold her giggle attack any longer, which tipped Lauren over into her giggle-fest…and I lost it right along with them.

Little Lo, as we affectionately call her, just giggled and giggled along with her sister, and then said her new favorite phrase…

That sent us all into a laugh attack.

How could I have stayed mad at her after that?  There’s no way!

At 19 months, she’s got it down.  Apologizing to Mom with an outburst of cuteness is way easier than asking for permission.  I’d better triple check the safety bar…because I’m in for one heck of a ride….