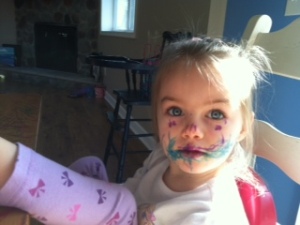 Yes.  She “marker-ed” her face.  And her fingers and her toes…and my kitchen table.  Oh, and a little bit on the coloring book, too.  That’s what I get for drying my hair.

Moms, you know how it goes…Our own hair takes a back seat…especially on Monday morning.  Especially for someone like me, who crams a run and a shower into the madness that already encompasses our mornings.  But…I just got a hair cut.  And…I love it!  So much so, that I actually felt motivated on a sunny Monday morning, to dry it, straighten it, and wear it down.  There’s no way I could squeeze it in before pre-school drop off…so I put a hat on over my wet hair and looked forward to coming back home and spending that hour in between school drop off and my youngest daughter’s music class in my new bathroom…where I can can actually plug the hair dryer and the flat iron in all at once…and doing my hair.

Now, usually, as soon as I set off to get something accomplished, my kids are peeking in every 5 seconds with a demand, request, comment, tattle, tragedy…it’s always something.  I can’t read books, blog, take a bath, dry my hair…get dressed…no.  They have to be in the know…and apparently so do I.  But this glorious Monday morning…I got 10 whole minutes to myself to do my hair in peace.  Hmmmm… I enjoyed it so much I took a picture of my hair cut and put it on facebook.  Even changed my profile picture.  Could it be, that my little Lo was just old enough to entertain herself for 10 whole minutes…going on 15? 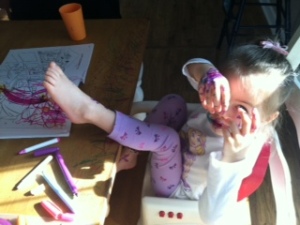 She had found her big sisters fabric markers, tucked away in their own pencil case in Brianne’s art easel.  Lo decided that the 3 boxes of brand new crayons in her drawer weren’t good enough for her new coloring book.  So, she took the markers and sat back down at the kitchen table to create new masterpiece in her Alice and Wonderland coloring book.  Then, after coloring the picture for a while, she had an even better idea.  Lo decided to marker her face.  And her hands.  And her feet.  And her legs.  And my kitchen table.  And….well, she was dotting her eye lids when I pranced so happily down the stairs and our eyes met.

I had a moment.  A moment where I usually would have lost my mind completely…yelled at her, spanked her butt and sent her to her room.  But that sunny Monday morning, I had a moment.  Maybe it was new hair cut, putting me in such a good mood that even a markered child couldn’t destroy it.  No.  I knew that hair would be back in a pony tail by noon…and it was…

Lauren looked me straight in the eye…and in that tone of voice she uses when she tattles on herself (which is a lot…before she’s even been caught doing something…and sometimes she makes up stuff she didn’t even do…which is totally weird…), and said…

“Lo!  What did you do?!” I said back to her in a bewildered and shocked tone.  She continued to look at me like she KNEW she was about to get disciplined.  Then she said,

“I did my fingers and my toes…” 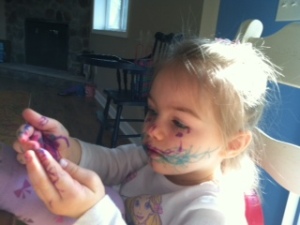 It was seriously everything I could do not to laugh!  Who was I?!  This was not me.  I’m gifted with volume, and my girls know it…especially when they misbehave.  I’m sure that’s what Lauren was expecting.  But, I just couldn’t do it.  Something urged me to see if the marker would come right off before I flipped out on her.’

“Go look in the bathroom mirror, and let’s say a prayer it comes right off, Lo.”

If that little peanut knows how to pray, believe me…she was.  I was!  I wanted so badly for it to just come right off so that my calm state remained in tact.  Wouldn’t you know…permanent fabric marker…and it came right off her face.  And her hands.  Not so much her toes…but we got most of it.  Came right off my table, too.  The fear in her eyes was proof enough that she’d learned her lesson before I’d even had to say it.

And honestly, look at her face?  What a nut!  How could I be too terribly angry with her?  After all, she was just being herself.  Lo has been destructive ever since she was a baby.  Messy eater.  Sticks everything into her mouth…including but not limited to rocks, dead fish on the beach, and Q-tips.  Into everything.  Ask my husband how many stickers he’s peeled off the floor.  When she discovered crayons she decided to update the color of our kitchen floor.  She has no regard for her body when she leaps into the air.  No worry about how she’ll land or what she’ll damage when she looses her balance in that last ballerina spin…or clips the table on her 50th lap running around the house.  That’s just my Lo.

Maybe it’s that a part of me wishes I had that carefree spirit that Lo Lo does.  It’s a cool part of who she is.  It reminds me to relax, sometimes.  Now, when she’s yelling…I mean yelling…at the top of her lungs at other kids on the play ground?  That’s when I yank her back to reality, into the van, and back home to sit in her room.  When she hauls off and clocks her sister for no reason at all but to provoke a situation?  Looks at me and screams “NO!” as if the louder she says it the more seriously I will understand that this time she means it?  Listen, the kid doesn’t have free reign.  She knows when she’s crossed the line.  She cries before I even punish her.

But for now, I think I’m just going to have to hide the scissors…because I think my mom is right.  The hair will be  next.

← The Bunnies and the Puppies
Honey →