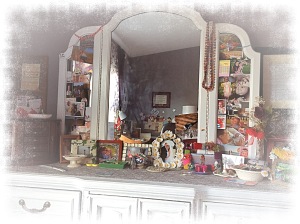 The battle of reflection is won in Jesus.

My daughters are obsessed with the bathroom mirror, especially when the clock is racing at opposite ends of the day. Apparently, that appears to be the perfect time to substitute a toothbrush for a microphone, and a step-stool for a stage.

If you need a little bit of sunshine to belly laugh your way through the morning routine, try creeping up on your kid while they’re in the middle of a ballad. … Better yet, try catching a bit on film …

“MOM!!!” my daughter screamed as she fell off of the stool wide-eyed and landed in a panic half-way across the bathroom.

My legs buckled in laughter, and mind flooded with reflections of my own lip sync grandeur.

Their obsession with the mirror has resulted in a lot of early morning laps run around the yard (their punishment for breaking a house rule) from territorial struggles over air-time on the bathroom stage. It’s going to make them late for school one day …  I just hope it doesn’t distract them from pursuing their purpose. 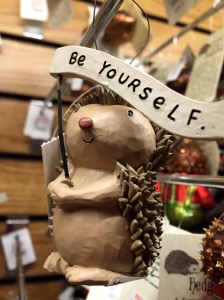 “Look at her elbows!”  Before I was laughed out of cheer-leading tryouts at my Catholic grade school, I didn’t even realize my elbows hyper-extended.

“You’re  fat.” Every woman faces it, mocked or not, and the age at which we risk becoming slave to it gets younger and younger…

“You’re flat!” And with that, this small-chested girl’s self-esteem took a defeating nose dive.  I was twelve.

Thankfully, Jesus grabbed my heart at an early age, and turned me into a product of prayer enabled to overcome the pain of reflection with laughter and silliness. Jesus gave me a crash course in His creative vision for my reflection. 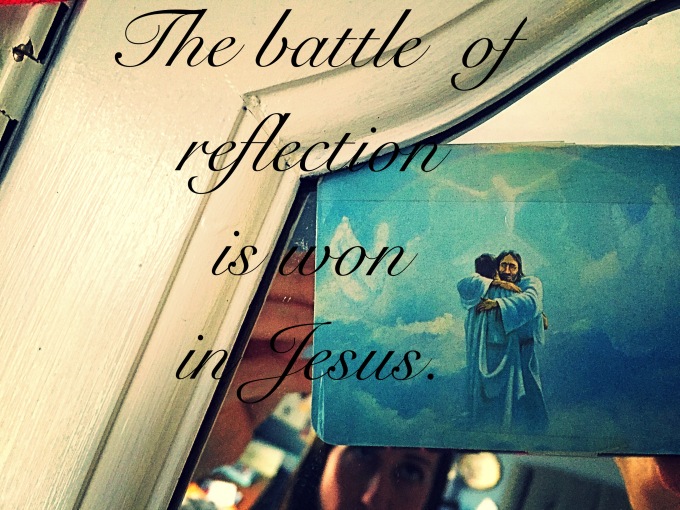 The scars slowly became sentiments I learned to disregard, rather than lose precious minutes to a mirror haunted by comparison. Exercising a heart of encouragement, I stick motivational quotes, pictures, stickers,  and necklaces my daughters have made in the spaces that surround my reflection.  A recent discovery illuminated the humor within my inspirations to distract me from a self-destructing glance.

I believe with all of my heart that God gifted us sarcasm because He has mastered it, possessing a gut breaking sense of humor.

When my daughter gave me a pat on the belly (after I’d just been training for a marathon) and told me it looked like I had another baby in there, I purposefully pushed back the lump in my throat and responded by making my belly talk in a high pitched voice until we were all rolling on the ground laughing.

A powerful rendering I can gift my daughters is the vagueness of reflection. To have them grow up without purposefully picking a part their appearance would answer a ginormous prayer. I’m raising them to be active beings and healthy eaters … and to love dessert.

I try not to let my weight control my reflection, by leaving it out of conversation.  I don’t own a scale, but I’m aware of how my pants fit … that’s enough.  I’m a runner because it’s a passion God lent to me…but it’s not driven by the result of how it affects my physical appearance.

I give it up, and I lift it up everyday in prayer…and God is faithful.

In down times when injury halts my strides, the challenge to embrace the obvious scoop of Ben and Jerry’s Late Night Dough that overflows from the top of my skinnies heightens exponentially.  But I remain faithful in prayer, and I repeat what I know to be true.  It takes this girl a conscious effort to embrace the reflection. To be able to balance taking care of the body God gave me less becoming so obsessed with the bullets whirring past the echoes of my mind’s ears. 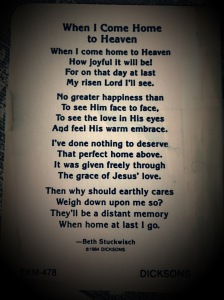 The hope I ascertain for my daughters is that the mirror won’t represent suffering and wasted minutes drowned in vanity …hours lost in worthless lament … days forgone in self-torture projected by another soul’s insecurities.  I pray they quarantine the precious minutes of life to achieve God’s purpose- and laugh…

“You need to be reminded of the power of imagination,” graced the words of Steven Furtick a midst my morning inbox devotions. “Your imagination is the incubation place for every great thing you’ll ever think,” he continued.

That same morning I flipped over to First 5, and Whitney Capps had written, “Can we accept Jesus’ authority even if it doesn’t look like we though it would?”

The cycle stops with me, in hopes that my daughters’ imaginations won’t be suffocated by perceived reflection; but rather, led by the dreams they harvest there.  It’s an impossible task that I am not built to achieve alone. I know that Jesus will grab my hand whether I’m running a marathon or buried in my books…and I in return will aim to honor Him and His sacrifice with every shred of my being, no matter which I’m blessed to be in midst of.

← The Reindeer.
The Weird One →

7 Comments on “The Mirrors”