Welcome to the #recall12 series, where we are memorizing a little bit of God’s great Word each

month! This month’s verse is:

“The Eternal watches everything.” 2 Chronicles 16:9

Her lack of patience gives away her hiding spot every time. She just can’t stand the suspense of waiting to be found. My little girl prefers the ‘seek’ in hide-and-go-seek.

This month’s verse wraps us in protection. We don’t have to live in the suspense of our secrets being revealed, because God’s already aware of whatever we may attempt to hide. On the flip side, He sees us when we are in hiding, too. Whether to comfort us through darkness, or to meet us in the dark to defend us …He is watching.

The Eternal watches everything that happens on earth so that He may strongly support those who follow Him. 2Chronicles 16:9 (VOICE)

“The Eternal,” as translated by The Voice, further expands upon how inclusive His care is over us. From the time He created us to the time we hug Him in heaven …eternally, God is for us. The book of 2 Chronicles records the stories of the kings that attempted to return Judah from their fall from God. Some of the stories of Kings’ David and Solomon are recorded in 1&2 Chronicles. By the time we get to today’s verse, it’s Solomon’s great-grandson, Asa, that is sitting the throne.

“He led a wildfire revival, with the whole nation uniting behind him in a huge celebration in Jerusalem. Yet Asa became cocky in his later years …He did much good but fell short of the kind of courage that endures a national crisis.” (NIV Student Bible Notes)

The NIV translation of this verse uses the word ‘heart.’ …to strengthen those whose hearts are fully committed to him. Though Asa had a wonderful heart for God, he still ended up struggling through some thick sin towards the end of his life.

The other half of today’s verse is starkly different:

By hiring mercenaries, you have acted foolishly and proven that you are not following Him. From now on, peace will elude you and you will surely fight wars. 2Chronicles 16:9b

Before this harsh warning of the consequence of Asa’s sin, Hanani (the seer delivering the above message) reminds Asa of all the previous victories God gave Him at the hand of his obedience to Him. Asa was a great king and leader for most of his life, but his human imperfection leads him to fall out of God’s grace in end.

‘You have done a foolish thing, and from now on you will be at war.” 2Chronicles 16:9b

Our humanity will fail us.

No matter how much we intend to do well, and how diligently we seek after God …we are destined to imperfection. And our God is too holy to be in the presence of sin.

In His compassion, God scratched the record needle as it lay stuck on the song of man’s failure …and put a new song in our hearts. Grace. Jesus. Forgiveness.

When Jesus came to earth, He took on humanity. He knows what it’s like to be hungry, hurt, and sad to the point of bloody tears. As we read of His life, we see 2Chronicles 16:9 in the way Jesus calls on His Father in times of distress. We witness it as God turns His back on Jesus to save us all as He died on that cross. See, 2Chronicles 16:9 is a story of glory for us. We can get back up. Our lives aren’t ever wasted on account of what we have done or will do. It is never too late. We are never too broken. God will always forgive us.

The way we act on this earth will never trump Christ’s act to save us. Our misbehavior doesn’t 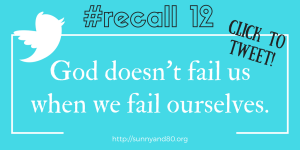 ever trump what happened on that cross. Our King. The King of Kings. The one who is and was and ever shall be. He will not fail us as human leaders do and as we fail ourselves. Instead, He blankets the fall of our humanity with the forgiveness of grace …promising us that He will watch over us …assuring us that He sees all.

For the eyes of the Lord range throughout the earth to strengthen those whose hearts are fully committed to him. 2 Chronicles 16:9

There’s no reason to hide or feel hidden.

We’ve got this …because He’s got us.

This post may be appear at the following link-up parties. Come join us!

Wednesdays…#TellHisStory, OhMyHeartsieGirls, Coffee for Your Heart, From Messes to Messages, Wordless Wednesday, Amanda’s Books and More Linky, Coffee and Conversation,Wow Me Wednesday,Wine’d Down Wednesday,