““What have I accomplished compared to you?”Judges 8:2a 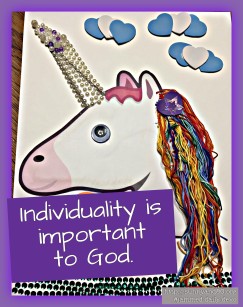 The 100th day of school has become quite the celebration over the last decade. As a child of the 90’s, or a Catholic School Kid, I missed out on that celebration. One of the two. My six-year-old looked through Pinterest for ideas, and wanted to do them all. So, we closed it and started to brainstorm.

“How about 100 lollipops in a flower pot?” She said excitedly.

“No, we just saw that on Pinterest …think of something you want to do,” I told her.

“OK …how about 100 candies that make a rainbow!” She was even more excited.

“But we saw that one, too…think of something you didn’t see already.” I coached.

“Hmmmmm….” spent the steam from her ears….

And that day, the 100-corn was born. She had 100 sparkles on her horn, and 100 rainbow hairs on her head. I was so glad I had left Pinterest behind in exchange for my own little idea factory and her over worked imagination. I love to watch my girls imagine an impossible idea, and then put it together piece by piece. The 100-corn will join the ranks of the turkey disguised as Harry Potter.

Here is the second half of today’s verse from Judges, which talks about comparison:

“Aren’t the gleanings of Ephraim’s grapes better than the full grape harvest of Abiezer?” Judges 8:2b

gleaning- Picking up grain or fruit left by the harvesters. (Dictionary of Bible Themes)

First born sons held a lot of weight and privilege in ancient kingdoms. Abiezer was the grandson of Joseph’s oldest son, Mannessah. Ephraim was the youngest son of Joseph, yet when adopted by Jacob shown favor over his eldest brother. Break in tradition like this is a mark of point made by God. Individuality is important to God.

“What you have is less important than what you do with what you have.” Andy Stanley, The Comparison Trap

When encouraging our children, let’s take stock to remember what God deems valuable. He has created them so uniquely individual, that if we’re not careful to avoid comparing them to the world that surrounds, they will struggle to learn who they actually are.

Father, Praise You for our uniqueness! Thank You, that You do not measure our value based on world measuring systems. Forgive us, for we do! Bless us to be compassionate and accepting of others, and encouraging lights to our children. In Jesus’ Name, Amen.

Get the conversation started by commenting below, and let’s encourage one another as we face life in 2017 armed with grace!

Get the #jammed Daily Devo sent straight to your inbox each morning, by subscribing to Sunny&80.